What kind of suggestions does Donna give?

Written by Anton Södergren
Updated over a week ago

When analysing your document, Donna finds common mistakes and patterns and gives you suggestions of how to change the wording for improved clarity, and improved appearance of the agreement.

This document gives a few examples of suggestions that Donna will give upon detection.

Donna double checks all your references and cross-references for missing common problems like missing clauses, or incorrect numbering.

Text does not match cross-reference link

A common example is when a cross-reference has gotten out-dated after adding or removing a few clauses in an agreement. Donna spots this immediately and gives you a hint of what is going on.

Donna keeps track of all terms you have defined (and not defined), to spot possible problems that have sneaked in to the document.

Did you happen to define something twice? That's a hard one to find on your own. Donna picks this up in a blink. Donna will also check if you defined the same meaning as two different words.

Did you miss a quote or did you happen to include a bit of punctuation? Donna will critique the style of your definitions, but in a friendly and coherent manner. She will make sure you are consistent, rather than following the perfect style guides.

Should you use a defined term here?

When adding an additional clause, it easily happens to miss an uppercase letter in the beginning of a word. Donna looks at the context of the sentence and raises an issue if it looks like you intended to use the term in the way you defined it. 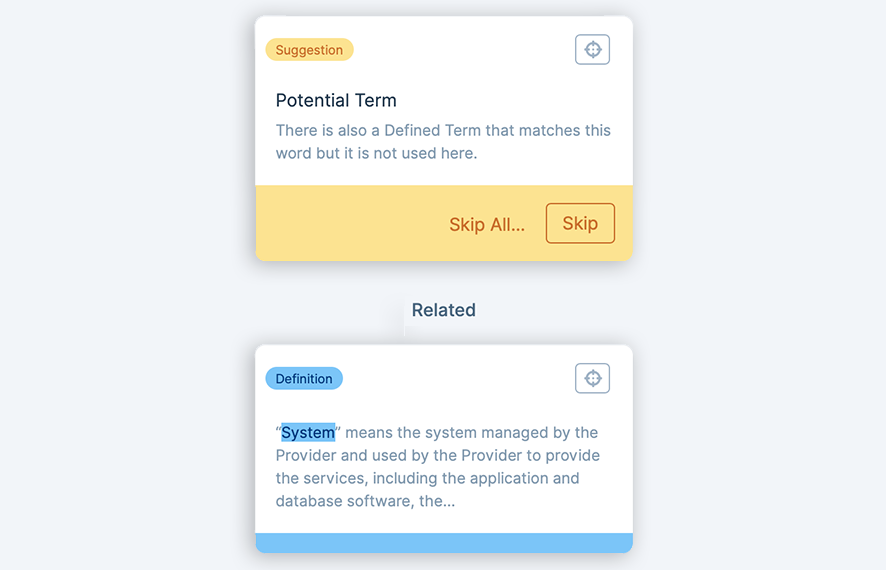 Sometime when copying a Section from another contract, a term or phrase comes along that should be defined, but isn't. Don't worry! Donna will spot the problem immediately.

Donna will look at the wording of your obligations and limitations and try to point out how you could phrase things differently for greater clarity.

May Not vs. Shall Not

The wars around which verb to use for stating your obligations may be flaming, but there are certain variants that are less preferable than others. An example of this is to use may not when the intention is that something is not allowed.

Sometimes the finest details can cause your obligations to have a very different meaning than what you intend. An example of that is giving obligations/limitations in a list, and missing to state if all of them or any one of them apply.

During analysis, Donna tries to pick out dates, money and amounts from the contract. Not only does she let you navigate by these types, but she also spots common problems with them.

Using a literal value, as well as a convenience value, to clarify the meaning of an amount is considered good practise, but when updating the specifics of an agreement, an extra zero in an amount can easily sneak in. Donna will double check all you amounts.

What day is this?

Are you longing for the weekend? Donna isn't. She will in fact point out if you have happened to put a contractual date on a Saturday or Sunday.

Did this answer your question?